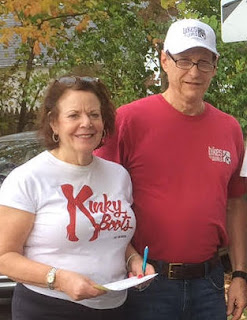 It's been a hotly contested fight. Surely there were some insults and promises. It was dragged out and indeed ended with some mud 'slinging' (after a rain delay), but it's finally over. We have a decided winner. America, the Cubbies are great again!

We don't know if Richard Lieberman was rooting for Cleveland or Chicago, or anyone at all, but when naming this month's Featured Volunteer we couldn't help but throw in a little baseball after last night's epic series finale.

And we found this baseball quote to be apropos for the occasion, "My responsibility is getting all my players playing for the name on the front of the jersey, not the one on the back," anonymous. 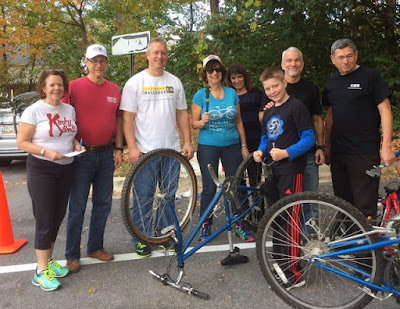 Meet the Congregation Beth El Bikes for the World crew. And the fearless and dedicated leader, Richard Lieberman. After more than a decade of collecting bikes for BfW Richard's red shirt appears to free and clear of bike grease.

Either he has effectively recruited an amazing team of wrenching volunteers or he regularly washes with Dawn dish detergent, which truly does power through grease! As does his hard working team (seen here in smartly chosen black shirts). This year they had a beautiful, warm fall day and the turn out was great. In fact Congregation Beth El saw their best year yet collecting 75 bikes.

Director Keith Oberg cited the dedication of Richard Lieberman and especially the amazing team he has put together year after year. Twelve to be exact!

Keith also pointed out the increase in bikes over the last few years which correlates to the publicity efforts of team member Linda Kolko (seen here in blue). Without taking sides, we'll just mention she's been preoccupied with another hotly contested race recently...but didn't let a little election get in the way of supporting one of her favorite causes!

Overall, Keith said it was a great day with a great group. He enjoyed working with the younger members of the crew who asked really good questions and were quick learners.

Posted by Bikes for the World at 7:21 AM