DEEP (Disability Economic Empowerment Project) is an eBox situated in northern Namibia not far from the TKMOAMS eBox. And like TKMOAMS, DEEP was established nearly a decade ago and reaches far beyond bicycle mobility.

Lavinia Friedrich, finance manager at DEEP, and Helalia Shipinge, TKMOAMS manager, are seen here with solar powered lights for sale in their eBoxes. These micro-business bike shops, originally established to bring affordable transportation to rural Namibia, have flourished and evolved. Many eBoxes now offer a variety of products to ease rural living, many cycling related, but not all.

It is the success of these small businesses, capital raised and reinvested, and the skill set provided and honed under the eye of BEN Namibia, that have given these communities hope and purpose. Many eBox businesses reinvest not only in their shops, but also in their community, in their people.

DEEP, as the name implies, actually began with hope and purpose. The original idea was to develop a project for people with disabilities. To help bring rehabilitation and home care through bicycles. Before the project even saw its first bike, however, DEEP evolved into much more. Those individuals with disabilities were called on to run the business. They were trained to be mechanics, salespeople, financial officers.

"This is the first time in my life that I have a permanent job. People think a disabled person can't do anything. You can have the same or even better skills as others, but people won't give the job to you," remembers Moses. But not since DEEP. 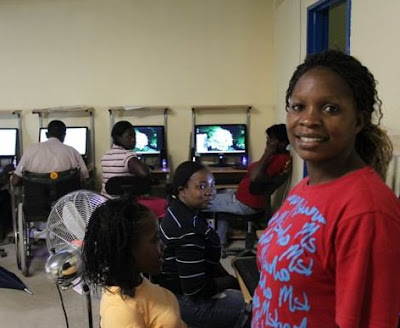 Lavinia Friedrich came on board with DEEP as the finance manager. When Lavinia was 14 she was carrying water in a container on her head. As she was returning to her village the container fell and struck her hip. When she went to the hospital for the pain she learned she had dislocated her hip and needed surgery. Four months later she was released from the hospital but walked with a limp.

Because of the discrimination against people with disabilities Lavinia struggled to find work before she found DEEP. She excelled in her position which propelled DEEP forward. Lavinia helped build DEEP from a busy bicycle shop into a thriving, diverse business. In recent years, through grant support, they were even able to add a computer training center and Internet cafe.

David Ingo lost his leg when he was six years old. When he fell playing soccer he was injured when another boy stepped on his leg. At the hospital the doctors found a bruise on his shin that they believed could have been cancer. His family decided to amputate the leg to save David.

David was trained as a mechanic at DEEP where he worked when he wasn't studying computers. "I would like to study electrical engineering, and I'm saving money and studying at home to go to college," reported David back in 2009. 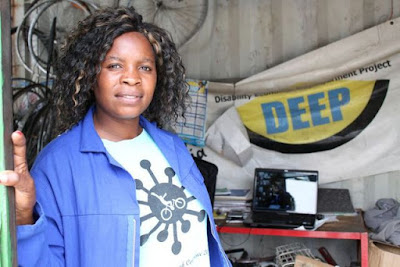 Last year we checked back in with DEEP. Moses was still there leading the team at the eBox and Lavinia was still in charge of finances. David followed his dream of continuing his education. He was taking classes to learn welding at a vocational school in hopes of returning to build bicycle racks at DEEP.

Unexpectedly last fall, we received word that Lavinia had passed away. From BEN Namibia:  "Lavinia was with the project from the beginning in 2007. Lavinia was a vibrant and dynamic person and showed her community that living with a disability is no barrier to achieving your dreams. Lavinia will be deeply missed by all of us at BEN Namibia. Our condolences to her family and colleagues at DEEP."

You can find DEEPs history along with many other stories in Namibia on Two Wheels by Gisele Netto and Michael Linke. Available now on Amazon.