The Okafitu Bicycle Shop is one of the more difficult eBoxes to get to in Namibia. It is located in the heart of the commonly known area Owamboland and you won't find any street signs pointing the way, just locally known trees that highlight the route.

But that's just what makes this shop so significant. Accessibility. It was established to help local people gain access and to bikes and help them maintain them. Without this shop, people were forced to travel great distances just to find parts and mechanics.

Until Hilya Ekandjo changed all that. Back in 2005 Hilya was chosen to take part in an exchange program that took her to London. "I was so excited to go out of the country! It was a dream come true," beams Hilya.

In London is where she first learned about bikes. A year later back home, she was graduating from BEN Namibia's bike mechanic training. She enthusiastically returned to her village hoping to share this new skill with everybody who was interested. She has since trained dozens and dozens of people in mechanics.

When she first asked who wanted to learn, she was surprised who answered. "Only women showed up. There was only one man interested," Hilya reported. After some time, she became known in town and soon, "if a bicycle has a problem, they would bring it here for me to fix it."

This Okafitu shop is really a booming family business.  Before BEN Namibia even established the shop in Owamboland, Hilya was busy training home based care volunteers who were involved in her father's church program that reached out to HIV/AIDS patients.

Lazarus Ekandjo is a priest with the Okafitu Parish of the Anglican Church. Father and daughter worked hand in hand to help provide care to residents in the community suffering from HIV/AIDS. Through Father Ekandjo's church program, health care volunteers were identified and offered training, using Hilya's new bike mechanic skills.

"Volunteers have to be able to maintain their bikes in good condition, otherwise they may have no money to pay for the service and this may keep them from doing their jobs correctly," said Hilya.

While Hilya trained and excelled as a mechanic originally, she quickly took over as shop manager. The success of the shop brought great fortune to the community and provided transportation and repair services to a very remote region.

Beata Ekandjo, Hilya's sister, now manages the shop that Hilya started in 2006. They continue to sell bikes and do repairs, but they also sell items like solar systems to bring electricity to this unplugged community. 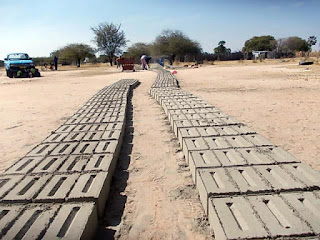 Seeing a need for a bigger more stable place to retail these solar lighting systems, Hilya used capital from the original eBox set up to start making bricks. She was able to build a new house and start construction on a new, permanent building for her businesses.

She and her father eventually created a brick-making business to help build a solid foundation for this community. Before, construction was often stymied when workers waited for bricks to be delivered from Outapi. This often delayed projects six months or more. Now, the bricks are made right in their own community, without delivery delay or charges.

Posted by Bikes for the World at 4:02 PM