Now that we've introduced you to the eBox concept and showed you the connection between two of BfW's partners, from one of the oldest (BEN Namibia) to one of the newest (Transaid's MAHEFA project in Madagascar) let's take a closer look at what makes an eBox unique.

The foundation or model remains unchanged from Namibia to Kenya to Madagascar. Founder Michael Linke developed and implemented this entrepreneurial 'bike shop in box' that has been creating jobs, income, and opportunities in communities all over Africa, specifically with BENN in Namibia.

There are now 33 established eBox businesses operating in many corners of Namibia. They sell bikes. They provide meals for orphans. They fund health care initiatives. They introduce new ideas like solar power. They create jobs. They offer HOPE. 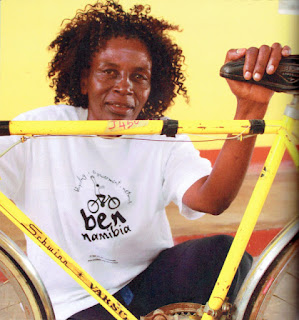 This is Helalia Shipinge. She is involved in a non profit known as TKMOAMS which was formed two decades ago to help people cope with living with AIDS/HIV. Ten years later the bike shop component, also known as TKMOAMS was added. This was to provide incentive to volunteers, jobs to the community, and of course bikes.

Helalia started volunteering with TKMOAMS when it started in 1996. Back then no one was even talking about AIDS. Helalia can remember people hiding sick family members out of shame. "People need information about AIDS and to be taken care of," Helalia said back then, and still believes today.

She remembers when she and the other volunteers received donated bikes through BENN. She used the bike to visit patients greater and greater distances. "Before (the bike) we just couldn't go, or have to save money to pay a transport or walk for hours. It's amazing how fast you can go on a bicycle and how far you can go on it," she beams. 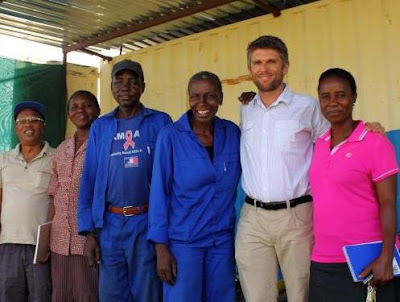 In 2006, Helelia recalls a local bike race she entered. She wanted to see how far she could go and she won the race! She was instantly hooked.

When she heard about the bicycle mechanics training being offered by BENN at the time, she jumped at the chance. She saw how bikes were helping fellow volunteers at TKMOAMS. She knew bikes were helping to save lives. "I don't know, suddenly I was surrounded by bicycles," she recalled.

Helalia, seen here with Michael Linke, is now the manager of the TKMOAMS eBox. This team met with our partner in Madagascar to help orient them while creating the MAHEFA eBox system to support health care initiatives in Madagascar.

You can find Helalia's story along with many others in Namibia on Two Wheels by Gisele Netto and Michael Linke. Available now on Amazon.

Posted by Bikes for the World at 5:58 AM