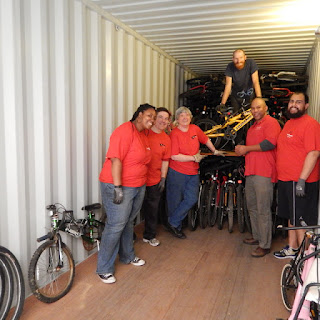 To us, this looks like the inside of an average shipping container. Bikes for the World loads and ships about 30 of these a year. They are packed with about 500 donated bicycles, each one of those affecting and changing up to four lives each.

But this particular container is different. This container was loaded in the spring of 2015 and arrived in Madagascar several months later. It contained over 500 bikes and tons of spare parts. But that's not all, the container itself would remain behind and become a workable, viable bike shop! 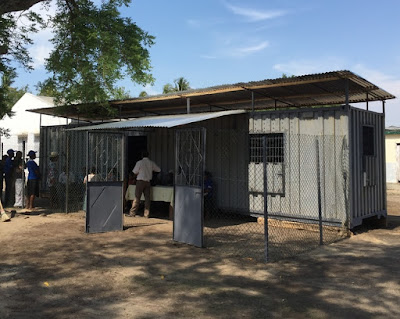 Jump over to Madagascar, and here's what that 'idea' would look like. This shipping container arrived packed with bikes which became the 'stock' for this newly formed micro-business.

The container is placed in a rural location to better serve new bike owners who may need parts or service in the future. Rather than traveling many miles to a city, where such services are available, this community run shop will help keep these donated bikes rolling while also creating local jobs in town.

The container is modified to better function as a bike shop. Maybe they add windows and doors. Another roof to help block the heat of the sun. It really becomes the bones of the business. And the heart of the community.

This concept is known locally in Madagascar as an eBox. It was more than 'borrowed' from BfW's Namibian partner Bicycle Empowerment Network (BENN); BENN helped establish and train participants in this pilot effort. Trainees learned about bike sales, repairs, and how to effectively run a business. Maintaining this project as a sustainable business is a top priority. 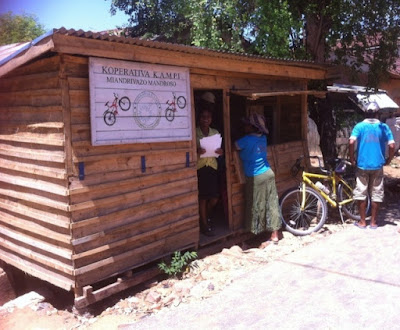 Ultimately, four cooperative bike shops were established in Madagascar through this recent effort. The container above, which shipped from Arlington VA, is currently being remodeled to become a lasting part of the shop, seen here, in Miandrivazo.

Our second container of donated bikes, which shipped in August, is set to arrive in Miandrivazo later this month. The success of the project relies on the new skills brought into the co-op and the arrival of a second shipment is testament that it is working.

Earlier in our blog we explained the importance of the eBox and how revenue generated through bike sales is helping not only the community but also the entire health care initiative established through Transaid. 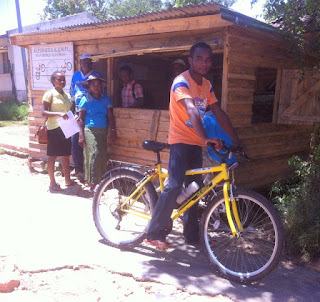 Mr. Joceyln is a peer educator and now bike mechanic. Mr. Joceyln is a volunteer who travels around spreading valuable healthcare information to people in his village. This important knowledge is helping save lives and keeping people safe.

To help Mr.. Joceyln travel long distances to reach more people, he received this brand new Spida bike through the MAHEFA project.  Mr. Joceyln was chosen to receive training as a bike mechanic as a means to offer an incentive for being a volunteer. He now also works as a mechanic and receives a small salary which helps support his family.

Mr. Joceyln will be on hand when our bikes arrive in Miandrivazo, and he will ensure that those bikes are in good working order before they are distributed throughout the region.

Email ThisBlogThis!Share to TwitterShare to FacebookShare to Pinterest
Labels: Madagascar