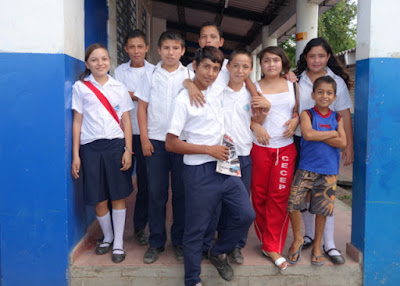 These are the kids of the future. The students of Centro Escolar Caserío El Porvenir, seen here, are working to change their community in El Zapote. El Zapote is located within the appropriately named hamlet of Porvenir, meaning Future.

El Zapote school is run by two brothers Hector and Jonathan Morales, who, in an effort to protect the environment, in turn saved their town. By implementing self-sustaining practices into the school curriculum, the Morales brothers harnessed the creativity and ingenuity of their students to provide food for lunches, income to support their many environmental projects, and even practices to protect neighboring species from extinction. Read more about the school and the many projects students are performing. 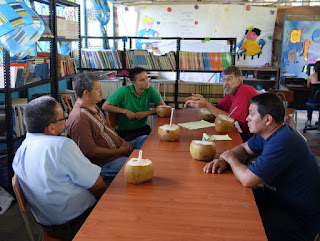 Five years ago Hector Morales approached Bikes for the World hoping to include a bike repair aspect to his growing list of sustainable activities introduced to his students. Since that time, Bikes for the World has developed a strong relationship with an environmentally based organization located in distant San Marcos. That group known as CESTA also added a bike repair aspect to the many activities they support.

When Bikes for the World visited CESTA in 2014 both groups sat down to explore how they may be able to work together using the bikes donated by Bikes for the World. Within months of our visit, CESTA hosted ten students from El Zapote who came to the city for a couple weeks where they stayed at CESTA and learned bike mechanics. 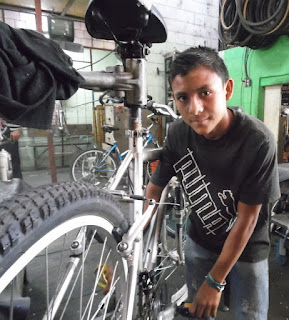 Edgardo, seen here, lives 3 miles from school and uses a bike to commute every day. When he was selected for the program he was excited to learn more about bike mechanics. The students enrolled in the program all ride a bike to school or use one for errands in town. Most of them do not own their own bikes and need to borrow one from a friend or family member.

All ten student mechanics enrolled in the program at CESTA reported similar experiences. None of the guys had much experience working on bikes so the mechanics at CESTA started with basic care and maintenance and worked up from there.

One of the most rewarding aspects of the program was the friendships that formed in the workshop. Getting to know fellow students and working side by side with CESTA mentors left a huge impression on these young mechanics. For a country fighting against an alarming gang presence, these positive role model experiences are a priority among youth organizations. 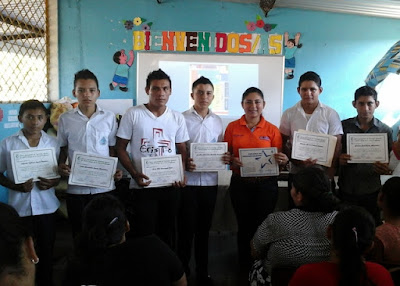 Once they finished the two week program, all the mechanic trainees were very familiar with all the parts of the bikes and now know how to build a bike up from the frame. They hoped to take these skills back to El Zapote where they will train other students to do the same work. Because of their extensive background in environmental studies through their school at home, the guys know how important bicycles are not only as affordable transportation, but as a non-polluting transportation option. 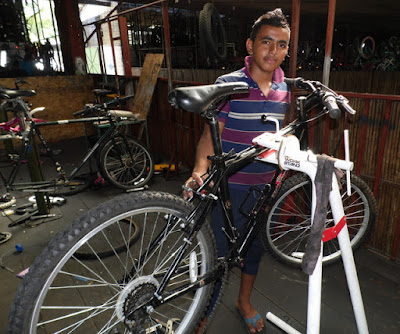 Marlon graduated from the CESTA program and took those skills back to El Zapote. He hopes to become a doctor or teacher once he is finished with school.

For now, he will teach other students in the workshop El Zapote set up at the school in the spring of 2015.

As a pilot effort, El Zapote bought many of the bike specific tools mechanics need to repair bikes for their student workshop. They also acquired a dozen bikes that the student mechanics repaired and community members are now using to commute more efficiently.

Posted by Bikes for the World at 6:46 AM