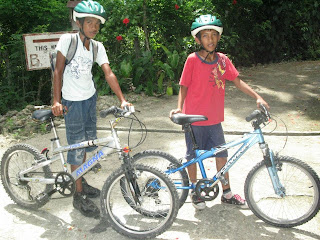 For Ron and Sherwin a bicycle could be the difference between graduating and not finishing school at all. In fact, many students in Baclayon, a remote community on the island of Bohol Philippines, travel many miles every day just to get to and from school. With only one high school in the village, students are often forced to travel more miles once they move up in school. This burdens not only the student but the entire family as less time can be devoted to necessary household chores.

Ron and Sherwin leave their house at 5am every morning in hopes of arriving to school on time after walking the two hour commute. The rough roads of Baclayon are long and rocky. After the rain, the roads become dangerously slippery. Some students do not even have shoes and most cannot afford transportation IF it even approaches their homes.

Both Ron and Sherwin have fallen on the slippery terrain after running in an attempt to make it to school on time. Students are not allowed to enter the classroom if they are late. They must wait until the afternoon session, causing them to miss half the school day.


The boys admit it would be easier many days to just not go to school. But they also know that the small sacrifices are worth the end result. Their parents did not finish school and struggle to find work to make ends meet. When Sherwin asked his mom for a bicycle to make the trip to school easier, she reluctantly had to tell him they could not afford it.

After a long day at school and a two hour commute home, students are exhausted and often racing daylight. Sometimes they don't even have enough time to finish their homework after completing the household chores at night. Teachers have also found students tired and distracted in the classrooms.

Since Bikes for the Philippines partnered with Bikes for the World students who live over 3km from school became eligible to receive a loaned bicycle through the program. Students who had once dropped out completely came back to school through this program and at least one of them has graduated back into the mainstream education system. Teachers tell stories of students who are more focused and on time for school. Parents are proud to have their children enrolled and thriving in school. There's plenty of time of chores and homework and most importantly, hope for the future.

Email ThisBlogThis!Share to TwitterShare to FacebookShare to Pinterest
Labels: Baclayon High School. Philippines bike use, bike to school, bikes for education, Bikes for the Philippines, Bohol, Philippines, students with bikes, walk to school